Home »Programs»Education»Reflections on a Decade of Progress in Palomas 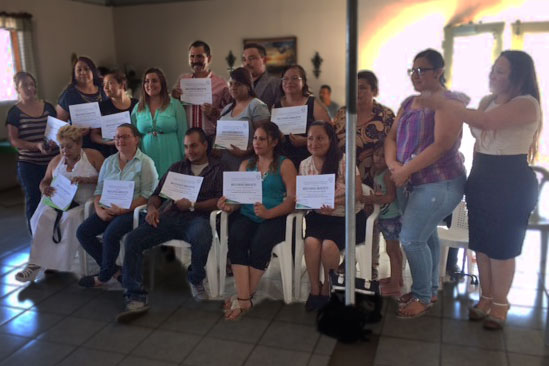 This week was Graduation Day for 14 students who completed a 12 week computer skills course. This intensive class met for two hours, four days a week.  Half of the class roster was composed of Border Partners staffers who are eager to learn. The event is the most recent in a decade of progress we’ve watched and fostered in Palomas.

Over 60 people came for the festivities and food, including many of the graduates’ friends, families and supporters. Border Partners provided the cake. I sat at the head table for the honored guests and got to congratulate each of the grads.

During the ceremony, while listening attentively to several speeches, I also reflected on Border Partner’s role in making this event happen.

Last night, during the graduation celebration, I looked around. Border Partners built those walls. We hung those doors. Border Partners wired those outlets. And we built the walls around the toilet (…now that was an improvement!).

Border Partners built the table and chairs where those little kids were eating. We provided many of the kitchen cabinets.

Yes, we’re making progress. We can see it everywhere.