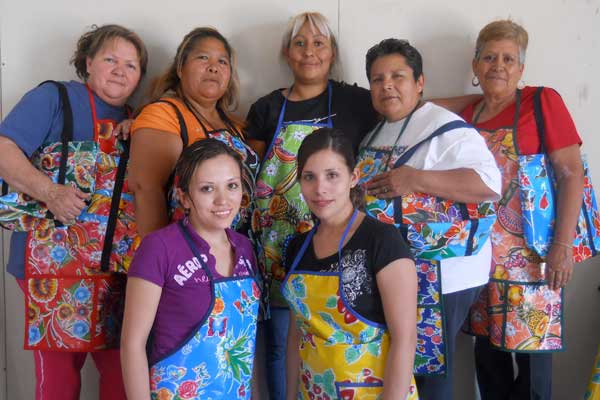 Beginnings of the oilcloth business 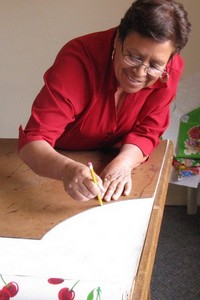 A precision cut begins the process of creating an apron from Mexican oilcloth.

In 2008, the Mexican women who pioneered what would become Palomas Oilcloth Designs, participated in an artisans’ co-op in Palomas. Ivonne Romero, owner of Palomas’s iconic Pink Store, suggested to some New Mexican co-op volunteers, that the women could fabricate items from the oilcloth that the Pink Store sold. Ivonne thought that she could sell those products at her popular store.

Initially only two women agreed to try sewing an apron from the oilcloth.  The fabric was heavy, slippery, and not easy to work with. Their sewing machines had to be outfitted for heavyduty sewing before the stitches were acceptable, but they persevered and soon encouraged some of their friends to try it.

A pivotal meeting between Ivonne and Tom Aageson, the executive director of the Museum Foundation of New Mexico, who believes “cultural entrepreneurship” is an economic development tool, launched the business. When Tom learned about the proposed new co-op in Palomas, he immediately made a personal donation to start the group. His seed money made it possible for the women to earn money up front for each quality item they produced.

More women joined the enterprise and, by February 2009, seven women were planning products they could make from oilcloth. Soon they expressed an interest in learning aspects of running their own business.  The group decided to always share the work equally and therefore, also the money. This policy continues to this day.

Since September 2009, each of the women have earned an average of $50-75 per week, based on a rate  of $5.00 per hour which is considered a “fair trade wage” in Mexico, i.e. a wage that would allow a person to support themselves. For each new product, the women determine how much time it takes them to make it. Then they multiply that by $5 per hour, add the cost of the materials and  10% for other costs to arrive at a wholesale price. Since a typical good job in Palomas pays about $50-75 a week, co-op participants now earn the equivalent of an average wage. However, the women would like to increase their average income to $100 per week, enough to pay all their household expenses. As their products improve, they know they can reach their goal!

Palomas Oilcloth Designs customers are happy with their purchases. We guarantee our products.

In March 2010, Tom and Carol Aageson gave an additional grant to the co-op to pay one of the women to take responsibility for coordinating tasks for the group. Polly Edmunds and Helena Myers, Border Partners volunteers, formerly handled management tasks of the small retail business (marketing, purchasing materials, tracking orders, communicating with customers, etc. Gradually they taught the women to handle these tasks. But as they did, administrative work took more time for a few people. It seemed fair that they should be paid for that time as well as for sewing. Now, the money to pay a coordinator comes from product sales.

Gradually, the women in the collective have learned and assumed all aspects of the business: purchasing materials, designing products, inventory control, and sewing. Now, the only assistance they receive from volunteers in the US is for shipping some products.

Hopes for the Future

The women hope that as sales grow, they’ll be able to expand, involving more women in the business and, thus, offering more families stable income from honest work. Your support of Palomas Oilcloth Designs, a fair trade business, will make that future a reality. Shop online or find them on Facebook.