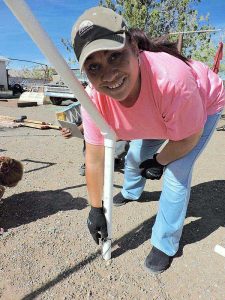 Aide pauses to smile as she places a post to support her family greenhouse, one of 10 projected new greenhouses in Palomas to improve home gardening and local nutrition.

“I have high hopes that greenhouses are the best way to produce abundant crops of vegetables in our climate of extremes.”  Peter Edmunds, Border Partners’ General Manager,  is in a position to say this as he took a break from supervising the building of the first of ten, new greenhouses Border Partners is building this fall at homes of successful gardeners in Palomas.

He went on, “Once people have the skills for managing a greenhouse, they’ll get enough more production to make a big difference in their extended families’ nutrition!”

Border Partners staff gardeners, Juana Flores and Juana Lozoya, chose gardeners to receive greenhouses who have been in their home gardening program for several years and shown that they can manage a smaller year round garden and get good production.  Most of them have also worked in the two large, year-round greenhouses that Border Partners has had for five years on a public site.

Funded as part of a grant to improve nutrition in Palomas from the Paso del Norte Foundation, each greenhouse will be 12’ by 15’ and covered by plastic in the cold months and shade cloth in the summer.  Vegetables will grow year round in raised beds filled with composted soil and a rainwater catchment system will provide a portion of the water needed.

The greenhouses do not, however, arrive complete.  More than a little assembly is required and it’s good to have some help.  One of the requirements is that each person who receives a greenhouse must contribute 40 hours to building greenhouses for others after theirs is complete.

An important goal of the project is to encourage people with skills to share them with their neighbors. 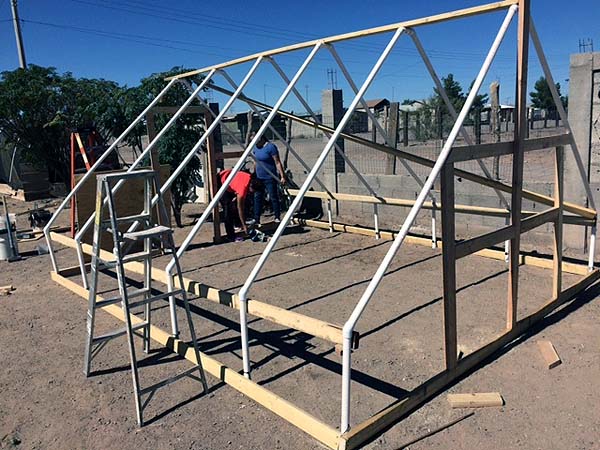 One of ten new greenhouses under construction in Palomas, this foundation represents the teepee style building.

So, on an unusually warm fall day last week, several Border Partners staff members, along with gardeners who had received greenhouses already, were busy assembling a greenhouse for Aide Carreon.    After a pickup loaded with lumber, PVC pipe and tools, they got to work.

“I like working as a team,” said Flores, “if only the men would follow the women’s instructions, it might go a lot better,” she said with a smile.

Within a few hours, the frame was completed and the crew was invited into Carreon’s home to enjoy a hot bowl of homemade pozole.  In a few months, she expects to enjoy the first harvest, and the benefits will extend beyond her immediate family.

“Vegetables from the greenhouse will help me save money and improve my family’s diet,” said Carreon, “but it’s also a good example for my neighbors.”

Greenhouses are an important part of the effort to improve nutrition in Palomas.  Historically, due to the long distances involved, local stores have provided a limited variety of not-very-fresh produce at relatively high prices.  Home gardening was not viable due to the hard, alkaline soil common in the area and the seasonal temperature extremes.  As a result, many families rely on high fat, low nutrient diets contributing to the high incidence of health problems such as high blood pressure, obesity and diabetes.