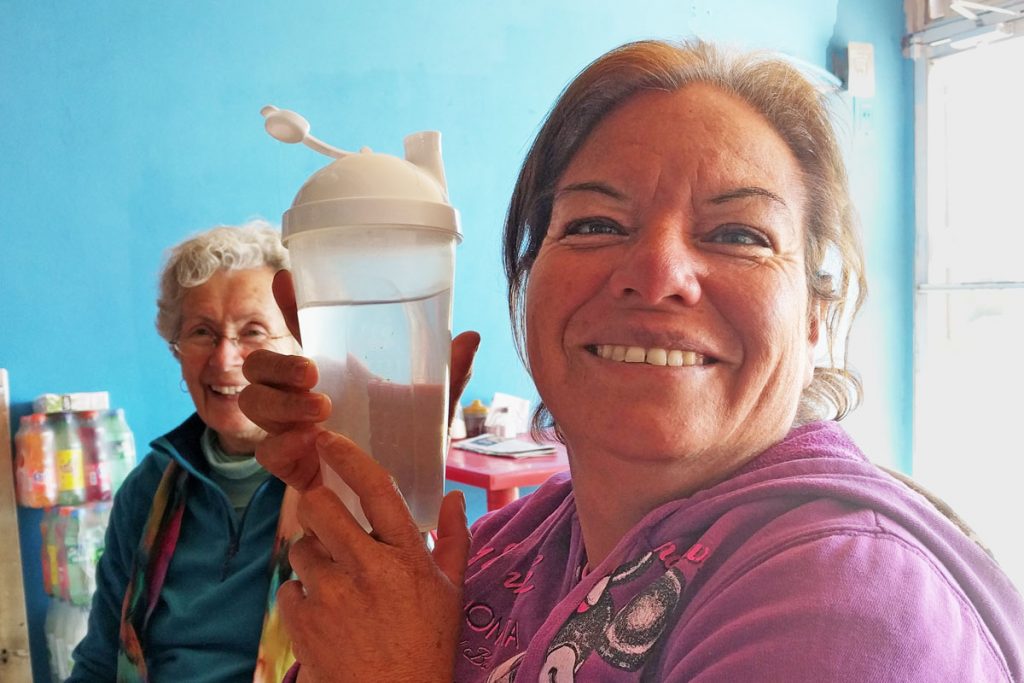 Palomas promotora (health promoter) Juana Flores took healthy living to heart in recent months. After years of attending trainings and also offering community education sessions, she decided to get serious about practicing what she was teaching. As a result, in the last five months, Juana has lost 38 pounds of excess weight and improved her general health measurably.

Last year, on October 1, Juana began a concerted effort to improve her personal health. Concerned with her elevated cholesterol scores, she believed that she could do better. She started a program of regular physical activity, including an hour of exercise each morning and each afternoon: walking, running, attending yoga and Zumba classes. She eliminated pork and red meat from her diet and focused on vegetables. Her secret weapon in the battle? She drank six liters of water each day.

This month, Juana’s doctor confirmed that her osteoporosis test showed a 25% improvement. And, her cholesterol is once again normal. In addition, she notes with a smile, by losing excess weight she’s dropped five dress sizes and actually enjoys wearing dresses again!

Juana’s husband, seeing her results, decided to join her self-improvement efforts two months ago and lose excess weight also. In those two short months, she says, he lowered his blood sugar significantly by walking and by drinking fruit and vegetable smoothies with supplements twice a day. He also eliminated white flour, cakes and pastries, cola and alcohol from his diet.

As Border Partners’ main gardening coordinator as well as president of the promotoras, Juana is always on the go and is full of ideas! Juana does so much good for the community. She has taught nutrition to Palomas families and children for the past two years with the support of HEAL grant funding from the Paso del Norte Health Foundation. Board member Polly Edmunds calls Juana Flores “a mainstay of Border Partners’ progress in Palomas.”

But, only months ago, Juana complained of shortness of breath. She felt sluggish and tired all the time. Now, she says, she feels full of energy. And, Juana Flores is a prime example of energy, acclaims Border Partners’ Board member Helena Myers: “She’s a gifted organizer. And, watching her explain the necessity of healthy eating to school classes is impressive. Her talks energize children to fill their plates with extra salad made with vegetables from the gardens she helps grow. Juana explained, for example, how important a vegetable-rich diet is for diabetics, and two sisters, whose father is diabetic, went back for a second helping of salads that day.”

What’s Juana’s advice to someone who’d like to begin take control of their own health and lose excess weight like she did? She doesn’t hesitate:

She advocates a low-fat diet and awareness. Often, she thinks, people don’t realize the damage they’re doing to their own health, simply by not paying attention to daily choices and practices.

It’s great to see healthy living taking root in Palomas. Border Partners is proud to be part of the process.

Juana Flores, our newest promoter in Palomas, at her home garden.

Juana Flores, our newest Palomas promoter, came on-board this spring to coordinate projects funded by our grant from the Border Environment Cooperation Commission (BECC). She heads the crew that is installing greywater reuse systems in the homes of Palomas gardeners. These systems divert washing machine water to the gardens to irrigate the home crops.

Juana and her crew have already installed 21 such systems, after beginning production in April. These yield significant improvements by:

These photos illustrate that the water reuse systems, coupled with our compost soil augmentation system, are producing remarkable results:

In a few weeks, the plant growth is significant. The graywater reuse collection system is visible in the May 11 photo (above): note the blue barrel next to the house, toward the rear of the garden. The technology is not complex, so the cost is reasonable.