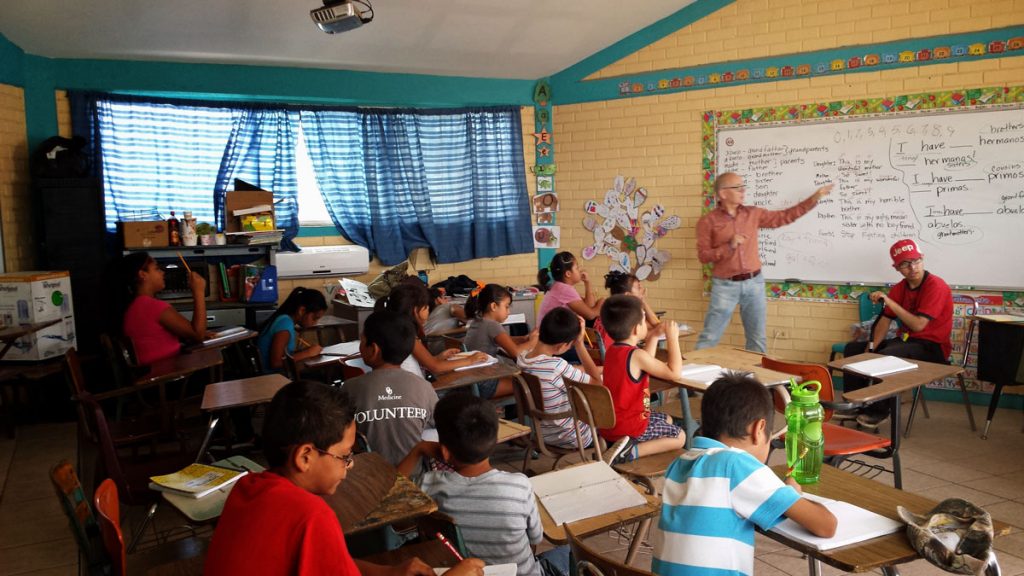 Hubert Lee Lowder is a blur of activity as he teaches English to these Palomas students during Summer School 2016.

Hubert “Lee” Lowder contributed a full month of his summer vacation from teaching elementary students in the U.S. to live and volunteer teach in Palomas. In this essay he describes his experience and what he learned. We are so grateful to have had him with us–a real Border Partner.

As an educator, I always introduce new units of study and with an essential question. In preparation for my four weeks of teaching at Border Partners’ Summer School 2016, I asked an essential question of myself: What can I learn from the students in Palomas that can improve my teaching and my community in Virginia? Too often, heavily resourced schools and high-income, highly educated communities believe they are the incubators of progressive education and community involvement. My experiences in Palomas dispelled that assumption for me.  Resources and wealth alone need creativity, cooperation and empathy in order to ignite change.

The four weeks I spent in Palomas have altered the trajectory of my life. Not only did I adopt a dog rescued in Palomas and fostered in Columbus, but I left Mexico determined that the final chapters of my life will be spent in service to the people of Palomas and the border area.

My students in Palomas were free to be children. They played hard, rolled, tumbled and teased each other and their teacher. Their lives are their own, unscheduled and free of the constant anxiety that permeates the classrooms of middle-class America. Are there risks in Palomas? Of course. But, the children are not bombarded with an unrelenting onslaught of remote possibilities and “what ifs.” The children are resilient, curious, welcoming and hungry for books, conversation and engagement. 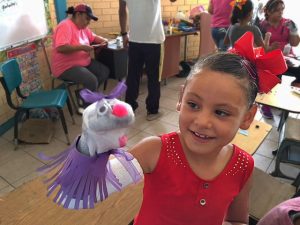 One child delights to display her sock puppet made at summer school 2016.

My students in Palomas moved constantly. A successful English or art class had to adapt to their rhythms and learning style. Forty minutes of sitting still, parroting English would be excruciating for them and doom me as their teacher. Lessons were quick and students immediately applied their knowledge. We acted out stories in English, which later became plays. We created puppets from tube socks, Googly eyes, markers and colored paper. Our first production, Romeo and Juliet in English, starred my right and left hands. Their ill-fated puppy love transcended cultural boundaries and time. It was a huge hit.

What the Teacher Learned

We incorporated English words for family members, pets, farm animals and clothing into our plays. Without any conscience effort the English and art classes merged and became cross curricular. The puppets encouraged children to take risks with English and their imagination. If your accent was off or you used the wrong word, blame it on the puppet.  Afraid of performing? Send the puppet in front of the foot lights.

Since returning to Virginia, I’ve tried to infuse my teaching with the same kinesthetic differentiation that worked so well in Mexico.  A teaching style developed under pressure and desperation in a Mexican border town is now being deployed at one of the best private schools in the Washington, D.C. metropolis. It works. Because, despite border walls, hysteria, the popularity of exclusion and fears of invasion, educators know that children respond to the same basic needs. They want to feel appreciated, wanted and know that they belong.