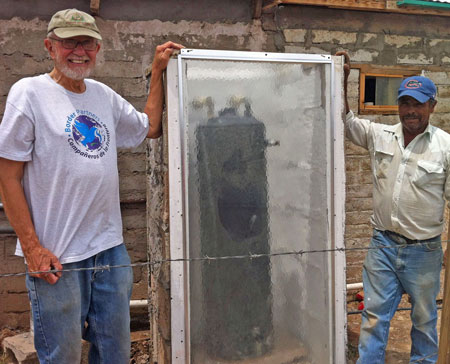 Border Partners produced this solar water heater, a device offering great utility to local residents. Most Palomas citizens do not use gas water heaters due to the utility expenses incurred in their operation.

It was time to put our work on display, and the public responded! On Wednesday, Border Partners held an exhibition of recently completed sustainable technology projects in Pto. Palomas. The exposition showcased a variety of projects in the area around the Public Library.

Our new addition to the library which is constructed of papercrete blocks took center stage. Papercrete blocks, locally produced by Border Partners, are lightweight, highly insulating, low cost and utilize recyclable material.  The addition’s roof is made of ferrocement, a building material known for reduced maintenance costs and long lifetime in comparison with traditional construction methods. This methodology reduces the cost of roofing far beyond any current methods utilized in Palomas.

A solar water heater and the graywater system for the library bathroom were also on display. In addition, participants visited the onsite demonstration garden where some of the raised beds utilize drip irrigation and a large tank collects and stores rainwater. The earth on this site has been shaped to drain rainwater away from the walls nearby where they had been eroding and is directed toward the garden.

Border Partners staff from Palomas led visitors through the exhibits, explaining the processes and their corresponding advantages.

We were delighted with a turnout that included Mayor Angel Chacon and two of his staff members, Maria Sisneros, an environmental engineer from the US EPA, and Jorge Hernandez from the Border Environment  Cooperation Commission. The Secundaria Principal and teachers brought their students. Two representatives  from the Small Business Development Center at Western New Mexico University as well as many interested adults from both Palomas and Columbus.

Visitors enjoyed snacks that were prepared and served from a solar cooker.

All projects on display were designed and built to be low cost and to conserve the Earth’s natural resources. Many projects use recycled materials. These projects were funded in part by a grant from the Border Environmental Cooperation Commission and the US EPA.

1 thought on “Putting sustainable technology on display in Palomas”