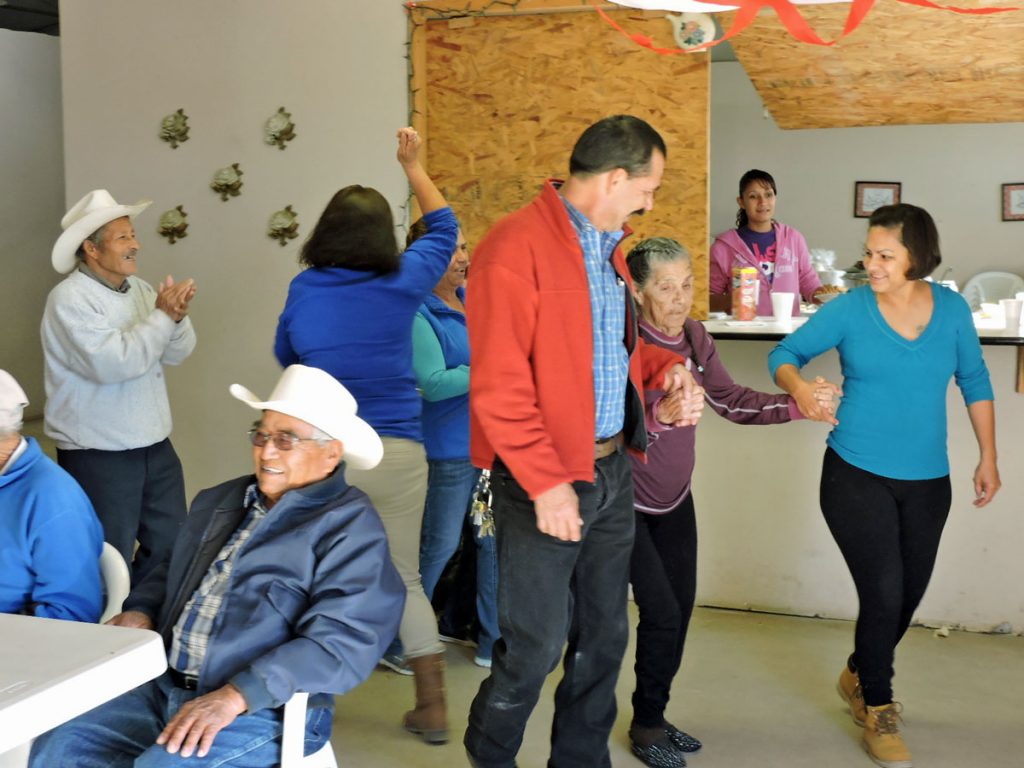 Under festoons of colorful crepe paper, senior citizens danced in a rumba line at the Promotoras’ Posada for the town’s shut-ins. 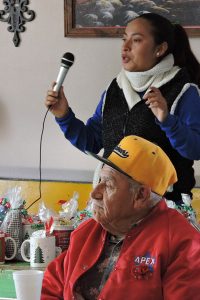 Flanked by gifts for the seniors, Viky Ibarra, head of the Promotoras, addressed the group.

Border Partners’ Promotoras (Health Promoters) arrived early at the Palomas Community Center on December 15 to decorate the dining room and prepare for a posada (Christmas party) for local senior citizens.

With the help of Community Coordinator Juan Rascon (pictured above in red jacket), they transformed that drab room into a festive space. They criss-crossed multi-colored streamers and hung piñatas that the seniors themselves made. Next they laid out presents that included handmade scarves and small, home-made stuffed animals they’d crafted.

While the Promotoras were decorating, volunteers were busy in the kitchen making hot fruited punch (with real fruit), champurrado (a traditional hot drink made with chocolate, spices and corn) and homemade tamales, without which no Mexican Christmas would be complete. 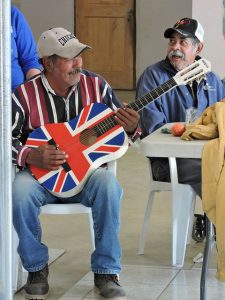 The seniors began arriving around 10:00. They sat and talked and laughed as others gradually wandered in. When a man in a cowboy hat arrived with a guitar and a small, black lamb on a rope, the party began in earnest. A little boy led the lamb outside and tied it to a tree. With a guitar accompanist, a man in a cowboy hat sang sad songs of loves lost. After their first number, the audience applauded and chanted “Otra! Otra!” (Another! Another!).

Next, a DJ put on a song with a strong cumbia beat. The group sprang into a rumba line–snaking out the door, around the building and back in another door. Clearly, not all of these seniors had lost their sense of rhythm!

Then the action moved outside to play a traditional game of piñata. One young man stood on the roof holding an end of the rope holding the piñata while another held the other end standing in the bed of a pickup. This arrangement let them raise or lower the piñata to make the game more exciting. 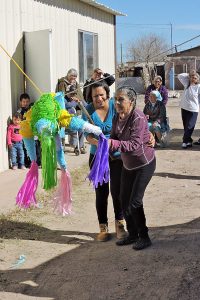 With assistance, seniors could all take a try at breaking the pinata.

Men and women took turns trying to hit the piñata with a stick while the crowd sang to cheer them on: “Dale, dale, dale. No pierdas el tino, porque si lo pierdes, pierdes el camino.” (Hit it, hit it, hit it! Don’t lose your aim, because if you do, you’ll lose the way.)

Finally, everyone sat down and relaxed with tamales and hot drinks. When all finished eating, they received gifts. Guests lingered and chatted until it was time to go home.

This posada was part of the Promotoras’ most recent program, currently serving about 30 senior citizens in Palomas. Many have no family to care for them. Participants meet twice monthly at the Palomas Community Center and receive a hot lunch. The Promotoras also provide activities–crafts, games, music and educational programs.