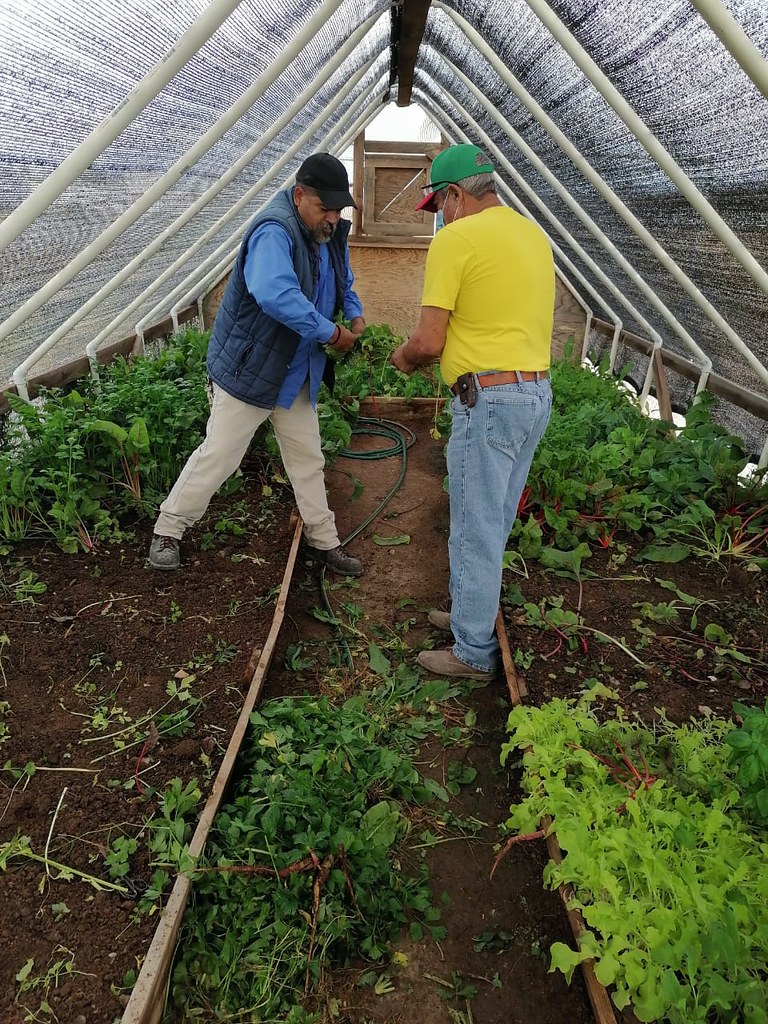 Two gardening coordinators harvest for Border Partners in one of the community greenhouses.

Sometimes what you remember most is not what you have seen but what you haven’t seen. In my ten plus years of working along the Mexican border what I haven’t seen is green – the green of fruit and vegetables being grown in people’s back yards. The reality is that communities like Palomas, Mexico or the area on the west edge of Juárez are “vegetable deserts.” Not only are vegetables not grown but it is almost impossible to buy them.

Border Partners, a non-profit formed in 2008 by Peter and Polly Edmunds of Deming and Helena Myers of Columbus, New Mexico is trying to change that in Palomas.

When they formed Border Partners, their two main Palomas issues were the lack of jobs and the poor health services. With a population of less than 5,000, no real industrial base and a long drive to the maquila plants outside of Juárez, job creation is always going to be a struggle for Palomas. In terms of health, however, Border Partners has been a leader and innovator.

Health is a huge issue in Mexico and particularly along the border. Seventeen percent of Mexican adults aged 20-79 have diabetes. It’s the third leading cause of death after heart disease and COVID. Mexicans consume more Coca Cola than any other country in the world with 634 8 ounce servings per year per person. ( The US is in third place with 403 servings per year.)

Starting in 2015, the El Paso del Norte Health Foundation began providing grants to Border Partners for a variety of health initiatives in Palomas and the smaller communities to the south. In 2021 these initiatives included.

Making two deliveries a month of food to three small communities to the south– Modelo, El Entronque and Victoria. I participated in a delivery to Modelo last September and the need was enormous.

What Border Partners is doing, however, goes beyond simply providing food. The larger goal is to change eating habits and encourage the consumption of fruits and vegetables. In shot, to change the food culture.

What we focused on during my February 25 visit was the gardening project, an innovative venture considering the relative shortage of water, the very poor soils and the lack of a culture of producing or even eating vegetables.

The first step is to improve the soil by mixing manure from the nearby feedlots with what is called biochar, a charcoal that is produced by burning pecan shells. Border Partners has produced a biochar stove that can be used both for home heating and for burning these shells. It was designed by Bill Knauss of Silver City and Adrian Acuna of Palomas is building them in his metal shop.

Border Partners is now working with families to help them implement this for home heating as well as the production of the biochar.

In addition, 42 families already have home gardens and 12 of them have small greenhouses.

Border Partners also has two greenhouses of its own. ( A third is planned.) The carrots, cilantro, varieties of lettuce, and other vegetables are used in the preparation of the meals for the 25 seniors. In addition, some bedding is to be packed in small boxes and taken to local schools so that students can learn how to produce vegetables themselves. What’s obvious, however, is that it doesn’t take much space to produce enough for a family.

How will this turn out? Will the initial families stick with the program of making the biochar? Can more families participate? Will the students begin encouraging their parents regarding a change of diet.

I think also of the barren terrain in the area west of Juárez where SPJ works. SPJ has exercise programs and will soon, we hope, be able to resume its twice-monthly health clinics. But what about a vegetable program there modeled on the work of Border Partners?

For years I’ve been making monthly trips to deliver food and clothing to the border but that’s just for temporary survival. What Border Partners is doing very different and much more important; it’s a project that is permanently changing life styles and culture. Congratulations and best wishes.

Morgan Smith has been writing about border issues for the last decade. He can be reached at Morgan-smith@comcast.net.