Border Partners’ stated purpose of creating new possibilities and self-confidence among community members in the small border town of Puerto Palomas appeared in an exciting new way at a meeting at the public library on January 17. Twenty-one individuals accepted the community-wide invitation circulated by Border Partners to come together:

Juan Velasco, an active Border Partners supporter and volunteer, facilitated the meeting, along with Border Partners founder Peter Edmunds. As a native Spanish speaker from Bolivia, “el Boliviano,” as Juan is called, stimulated honest and enthusiastic discussion among the Mexican attendees. 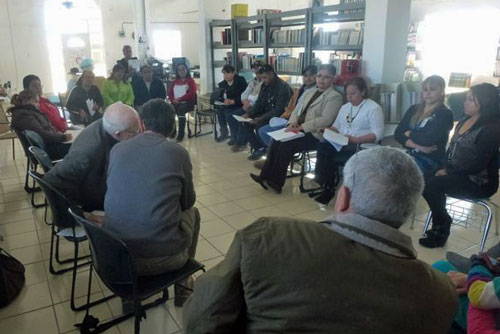 The group was unanimous in expressing their gratitude to Border Partners’ US- based founders, Peter and Polly Edmunds, as well as the many volunteers who have dedicated years of work and service to their community.

As the meeting turned toward the “what next” agenda items, the excitement in the room became palpable. A new level of possibilities began to grow. How could current programs become more sustainable on the Mexican side of the border and what additional help could they themselves provide to allow for their own hopes and dreams for a better future to become a reality?

The idea of creating an asociación civil, a Mexican not-for-profit organization, was met with
enthusiastic support. Such an organization would qualify for funds and grants from the Mexican government and industries. This revenue could supplement the funding and support already provided by the US-side of Border Partners.

The ensuing “we can do this” discussions considered a new Health Center, a Senior Citizens Center, perhaps even a bank! The community garden program could perhaps expand. With a nod of approval from Peter, Juan responded to the group’s request for more training with the commitment that he and Peter would provide small business development courses in the near future.

The ideas seemed to tumble one upon the other as the meeting came to an energetic close. The group set a meeting date for March 17 to formalize their preliminary discussions.

To see the sense of empowerment that permeated the attendees was most rewarding. Truly, this was a red-letter day for Border Partners!

Suzanne Dulle, resident of New Mexico, is a member of the Board of Directors for Border Partners and is also a regular volunteer for the organization.