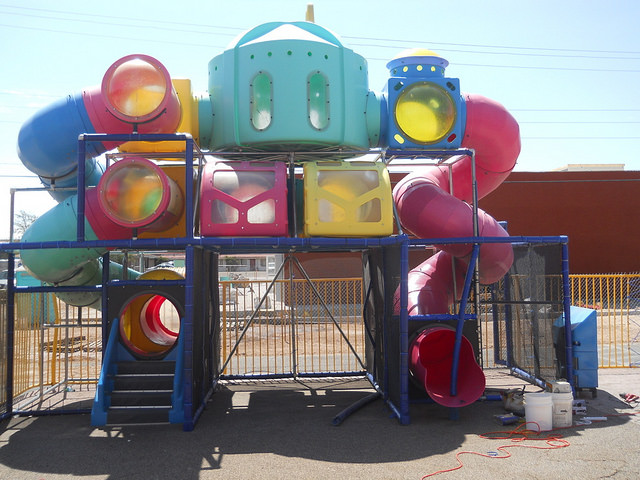 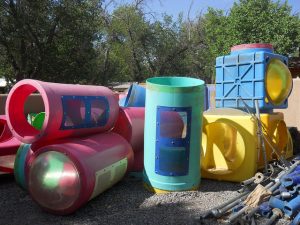 A new playground climber resides next to the public library in Palomas, Mexico. It crowns the efforts of a long and sometimes complex process–a process that involved literally dozens of volunteers to accomplish.

Last year Border Partners founders Peter and Polly Edmunds stumbled upon a U.S. playground climber that was destined for the landfill. Due to building construction, the climber was scheduled to be demolished. They had to ask: Could they have it for Palomas?

The answer was “yes”–if they could deconstruct and remove it before the bulldozers arrived. Volunteers from Deming, who responded on the spur of the moment, were critical in figuring out  how to get it apart.  Lacking a caterpillar to get the high piece off, someone invented a rope system to get it down.

Storing and transporting all the pieces across the border was another step in the process. Finding a place to store them in Palomas–they got that done, too.

But the final piece–reconstructing the structure–well, that was the real challenge. It involved a devoted crew and even a caterpillar to assemble the behemoth! It was like a three dimensional jigsaw puzzle, composed of rather weighty pieces.

The fruit of all this now stands proudly aside the Palomas library, where each day literally dozens of school children come to read, to use computers, to socialize in a safe environment…and now they can also recreate.