When Border Partners began working in Palomas, none of the five sites in town designated as parks had functioning, safe play equipment for children. Equipment at elementary schools was very old and some quite dangerous. There were: 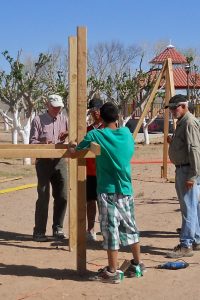 A work crew unites around construction of new playground equipment in a Palomas park.

And there was no government support to improve or maintain any of this.

Since 2008, together with the community, Border Partners has:

In addition, through the health promoters, we